A little more than a third of the world's population - 360 million people - is affected by hearing problems linked to the natural aging of the ear, called presbycusis. Fatigue, difficulty to understand a conversation in a restaurant or at television, confusion between words, habit of having others repeat themselves : presbycusis concerns 90% of current hearing problems and represents 95% of the indications for hearing aids from ENT doctors. Badlly perceived, because it testifies the ageing of the ear, presbycusis is no longer the prerogative of the elderly : in our noisy world, it manifests itself earlier and 25% of people under 30 have a hearing loss greater than 20dB.

Cost of hearing aids, aesthetics (80% of worldwide sales of hearing aids are BTE), complexity of the care path, complexity of the hearing device : in France, 3 out of 4 people concerned reject hearing aids ; in the United States, less than 20% of Americans seek hearing aids. Similar figures can be found throughout the world. By refusing hearing aids, these people expose themselves to the well-known risks of cognitive delays and withdrawal (see our article on the subject : The auditory brain: close correlation between hearing and cognition). In order to provide them an effective, immediate and discreet solution, SERINITI has developed the ORISON (invisible, digital, instant-fit CIC) and AZUR (rechargeable, digital, mini BTE) hearing solutions. 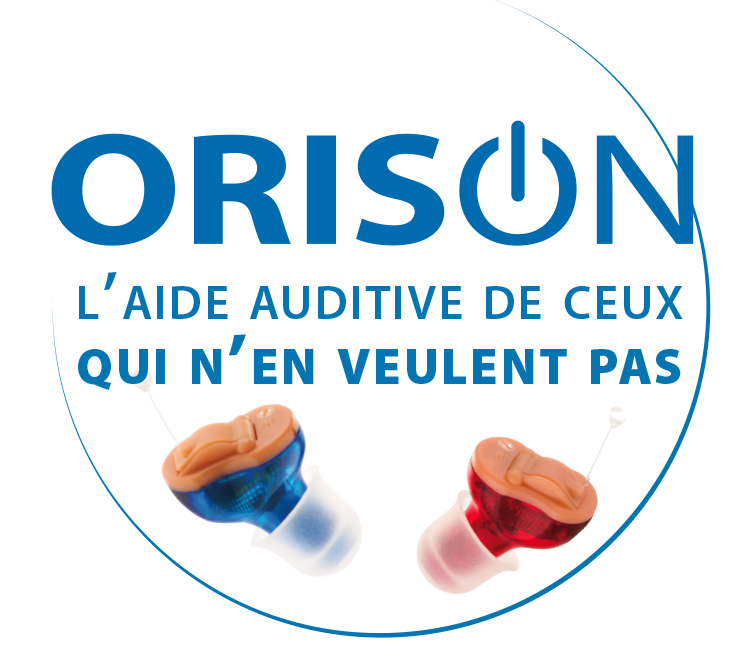 Presbycusis (read our article on this subject What is presbycusis ?) is a hearing loss related to the natural ageing of the auditory system. Presbycusis is :

Relatively common, presbycusis affects mainly the high frequencies, which are the frequencies that carry the voices of women, children, whistling and fricative consonants. Thus, it is not uncommon for men to be the first to be bothered by this hearing impairment. The characteristic audiogram of presbycusis shows :

The typical audiogram of a presbycusis is summarized as follows : 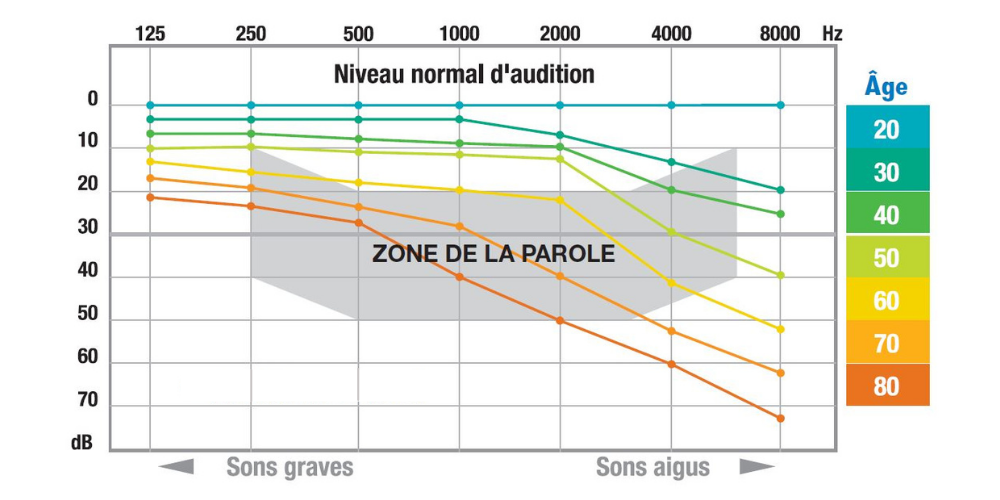 Thus, a hearing aid finely preset on the frequencies damaged by the ageing of the auditory system and equipped with a system allowing to intensify the need for amplification according to the user's feeling is possible with the current technological advances : this is what our hearing solutions ORISON and AZUR allow and what they were designed for.

Unlike people with a hearing disability, people with presbycusis have enjoyed the integrity of their hearing function for a time before experiencing discomfort. For them, as long as the hearing aid is not worn, the hearing loss remains invisible : the reasons for their massive rejection of hearing aids are as much psychological denial as aesthetic, cost and common sense.

"People with hearing difficulties refuse traditional hearing aids because the current offer is made for severe pathologies : long and regulated care path, BTEs preferentially offered (80% of worldwide sales), costly follow-up over years. The people concerned then assimilate their discomfort to a handicap and the hearing aid to a cane or a wheelchair. But this is not the case. With ORISON and AZUR, we provide immediate listening comfort at a fair price. And we offer a free choice between an CIC (Completely-In-the-Canal) and mini-BTE (Behind-The-Ear), according to their own preferences, not ours."

At SERINITI, we believe that the safest path to a hearing aid for people who experience simple discomfort is to offer them a hearing aid that meets their requirements for performance, discretion and cost. That's why we worked with a team of ENT doctors and engineers to develop our AZUR and ORISON hearing solutions. Over a two-year period, we compiled nearly 150,000 audiometric curves and synthesized 7 different amplification programs, which were then tested by over 2,000 people. In 2015, following these conclusive tests, we kept only one amplification program and refined it further, in order to be certain that our products offer true listening comfort while remaining simple to use.

To date, our challenge has been met :