When did the gesture of placing one’s hand behind one’s horn to gain a few precious decibels when they are missing ? Since time immemorial, people with hearing loss have been looking for ways to hear their surroundings better. Very quickly, from the elementary gesture to the shell in the shape of a cochlea, the end of which was introduced into the auricle, it was realized that a device in the shape of a cone or a horn would allow one to hear better by introducing it into the auditory canal.

Who has not experienced listening to the sea in the conch of a shell ?
When you return home, this oddity continues, which may seem strange if you live in central France. In fact, the shell acts as a resonance box and the sound we perceive is the one of the blood, amplified, of our body.

So we see that a conical device acts as a sound receiver but also as a transmitter or amplifier and the temptation to use it as such probably arose at the same time as the use of the receiver.

Musical instruments quickly made use of this property of amplifying an emitted sound, escaping through a horn-shaped instrument. The animal horn was the first instrument used to make itself heard especially during a battle.
The foghorn informed potential ships of its presence. It could be carved and sculpted from the ivory of elephant tusks (olifant) and was only worn by important people who went to war. The richness of the carvings made it a precious and coveted object and it was dishonorable to abandon it to the enemy (Roland, at Roncesvalles, will reduce it to pieces, according to the song, without managing to do the same with his Durandal).

Nowadays, the hunting horn is still used for hunting.

This property of reception and amplification of sounds by a conical object allowed Laënnec to conceive the stethoscope in 1816. This first stethoscope was simply a funnel that was applied to the subject’s thorax to perceive the pulmonary breath or the heart. Nowadays, some midwives still use a wooden funnel that they apply to the stomach of pregnant women to listen to the sound of the heart of their children in utero.

Let us return to our ears.
The first description of the acoustic horn dear to our professor Tournesol goes back to 1624.
After Athanasius Kircher in the XVIIth century, immense scholar who will leave, in the field of the hearing, a megaphone of his invention (illustration below), a Frenchman, Claude-Nicolas Le Cat, doctor, had imagined in 1757 an acoustic horn in polished metal which allowed an amplification of the sounds of approximately 15dB, figure which will constitute a reference until the beginning of the XXth century.

The number of proposed acoustic horns can be described ad infinitum, some of which drew in their cone a sketch of a snail, necessarily improving the performance of the said object. Indeed, the first step of the researchers being the observation, they had for a long time described the cochlea, internal organ of the hearing, characterized by its spiral shape, which, for the researchers of that time, had to be a condition sine qua non so that the acoustic horns are powerful.

The cochlea, the internal organ of hearing 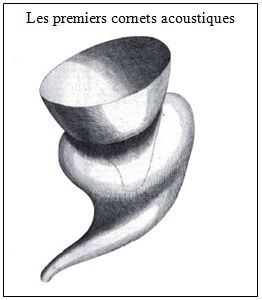 What milestones our hearing aids have reached these days!

What is the point of such reminders ? Much more than we think.
The man of the XXIst century has, alas, more and more tendency to exonerate himself from the good sense. Two points appear fundamental, so fundamental that they have been abandoned along the way :

This double role of emission-reception remains fundamental and this is why it is advisable to privilege as much as possible (there are rare contra-indications) the wearing of intra-ductal hearing aids. Apart from its aesthetic aspect, it benefits from the natural amplifier that constitutes the auricle of the ear with sound receiver and transmitter in intraduct allowing, moreover, already with only one device to feel a stereo effect, which a BTE is quite difficult to propose. 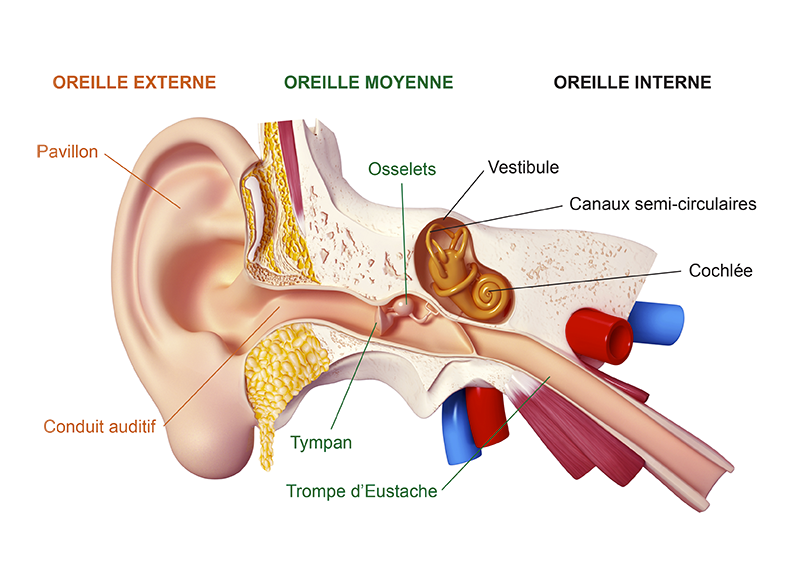