Home › Hearing › The consequences of noise on body and health

There is no such thing as total absence of noise, absolute silence.
A deaf or echo-free (anechoic) chamber, like the one created in the Orfield laboratories in Minneapolis, suppresses 99.9% of ambient noise, limiting the background level to about 9 decibels. In this environment, the ear perceives noises that it would not normally hear. But we also perceive a background noise in the ears, his inspiratory flow, the beating of his heart, all sensations not necessarily pleasant. If we are in the dark, the disappearance of all sound quickly creates discomfort, because of a total loss of reference in space (the sounds help to orientate us), forcing us to sit down. Such sensations are not bearable for more than 45 minutes. So silence, or what comes close to it, the “real” silence is unbearable.

In contrast, “noise” is defined as a sound that is considered undesirable and constitutes a nuisance from an environmental point of view. The annoyance caused is often the cause of disputes and is difficult to evaluate objectively. Our world has become excessively noisy, a source – in case of chronic exposure – of possible damage to our auditory organ as well as other possible inconveniences, such as stress, auditory fatigue, and sometimes even loss of intellectual performance at work, sleep disturbance, aggravation of anxiety-depressive states, etc. Chronic noise exposure of around 85 dB should not exceed 5 hours per week and at 100 dB, exposure should not exceed 1 hour 45 minutes. With this in mind, this article is divided into two points:

Hearing fatigue is defined as a temporary decrease in hearing performance, linked to prolonged exposure to sound. It results in an increase in the hearing threshold for a longer or shorter period of time after the aggression to the ear. Hearing fatigue occurs in workers who are exposed to sustained noise for too long or to a short, but high intensity noise attack. Everyone remembers the immediate consequences (which can last several days) of spending several hours in a nightclub, at a time when the law had not yet imposed an optimal noise intensity threshold (102dB since October 1, 2018, but lesions can occur as early as 80dB if this noise nuisance is prolonged). These symptoms are reversible, but too frequent a repetition can cause permanent damage to the hair cells of the inner ear, with the corollary of deafness (a point on this subject in our previous article: “noise pollution and hearing risks”).

For many years, labor laws have imposed maximum noise exposure thresholds, as well as limited exposure times and, if the noise thresholds are very high, the mandatory wearing of headphones. At this stage, in addition to the temporary inconvenience after work, the patient may feel the need to stop, morally exhausted by this chronic nuisance which leaves him tired after a trying day. Each person’s sensitivity to sound aggression is not the same, and therefore their feelings are different. 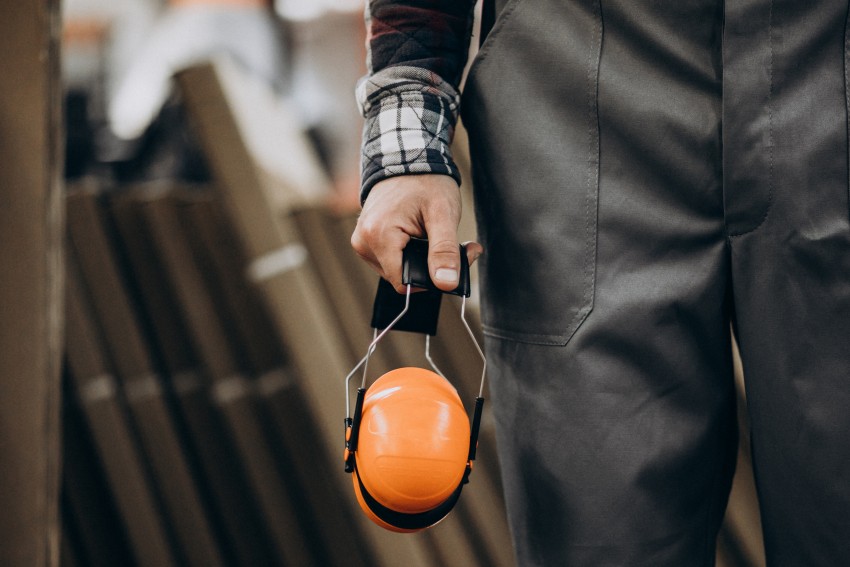 It should be noted that any company generating noise pollution must meet strict specifications and is subject to regular inspections. Any person who is “assaulted” by noise pollution in the course of his or her work can refer the matter to the occupational physician, who is required to check the good working conditions of the company’s employees. This is important for several reasons :

By definition, hypoacusis is a decrease in hearing, i.e. deafness. There are many causes, but here they are related to noise. It is therefore the next stage, i.e. the beginning of deafness, consecutive to the noise exposure at work. It is a perceptive hypoacusis (i.e. a hearing loss that affects the inner ear), irreversible, complicated or not by tinnitus, or even hyperacusis (we will see this term later). We have seen the consequences of a perceptive hypoacusis linked to noise (in the articles “Noise pollution and auditory risks” and “Can we prevent hearing loss?”), we will not come back to it, let us rather linger on the companies which generate a risk of occupational diseases (and only them, restrictive list, decree of April 1963 and update of September 2003), in spite of their tedious enumeration :

In order to fall within this framework, hypoacusis must be bilateral, as a rule symmetrical, preferentially affecting the high frequencies. It is measured after a period of exposure to noise of at least 3 days and must show adeficit of at least 35 dB on the better ear(average of the deficits measured on the frequencies 500Hz, 1000Hz, 2000Hz and 4000Hz.

The period of coverage is one year (subject to a duration of exposure of at least one year reduced to 30 days in the case of development of propellants, jet engines and thermal engines. Once the deafness has been declared occupational, no aggravation of the deafness can be retained, except if the patient undergoes a new exposure to noise. In other words, an aggravation of deafness, for a patient who is not exposed to any noise pollution, cannot be considered as an occupational disease. This is very important. Indeed, a spontaneous and rapid worsening of the hearing loss may even lead to a discussion of the validity of the diagnosis. A new check-up is therefore carried out 6 months after the first one, with the patient removed from the lesion sounds. This new tonal and vocal audiogram should not be significantly different from the firstone.

Please refer to the previous article, “Tinnitus, what is it ?”

Let’s remember anyway that tinnitus is a condition of a very high frequency, defined by the perception of noises in the ear that can take all possible forms (whistling, buzzing, squealing, waterfall noises, heart sound in the ear, sometimes pulsating beats, sometimes even perception of well-constructed voices, etc.). The aggressive and noisy environment in which we bathe is certainly not foreign to its genesis.

Tinnitus can be associated with the previously mentioned sensorineural hypoacusis.

Tinnitus can, however, be consecutive to other pathologies such as arterial hypertension, atheromatosis, whatever its cause (the narrowing of the arterial caliber transforming a laminar intravascular flow into a turbulent flow – image of the quiet river, as opposed to the torrent that makes noise – the vascular noise being transmitted to our ear. Tinnitus is often pulsatile. But these pathologies are beyond the scope of our presentation.

It is not, as some might believe, a question of an excellent perception of environmental sounds, i.e. a “super ear”, but of a hypersensitivity to the sounds which surround us, which is completely different and a source of great inconvenience, especially as this hyperacusis can be associated with auditory pain when exposed to certain auditory frequencies (painful hyperacusis). For normal subjects, these unpleasant sounds are still of acceptable intensity. It is in fact the threshold of intolerance to noise that is strongly lowered.

In the majority of cases, hyperacusis occurs following a sound trauma (which can be unique or chronic) and is then associated, in most cases, with tinnitus.

The case of musicians is quite characteristic (32% of people suffering from hyperacusis are professional musicians), which can lead to the cessation of the profession in severe cases (protection by selective earmould).

Sometimes nausea, dizziness, chronic fatigue (absenteeism), headaches, and even associated otalgia are described with these symptoms. Resting in a quiet environment improves the symptoms which reappear with new sound aggressions. Paradoxically, the audiogram is often normal, but can sometimes be superimposed on that of perceptual hypoacusis because the triggering element remains the same in the vast majority of cases. The complaint is usually bilateral.

Hyperacusis is a very different and poorly understood conditionthat appears from birth and affects only a very small percentage of the world’s population (2 to 3% it seems) . It is easily detected when a child plugs his ears at the slightest noise. Here, noise exposure is not involved in the genesis of the disease and the evolution is often serious. It is tempting to compare this last form with misophonia (“Misophonia, an affection of our time?”)

Is misophonia a differential diagnosis or are misophonia and neonatal hyperacusis the same condition? In any case, in our presentation it is hyperacusis related to sound exposure that concerns and interests us. It should be noted that, in all cases, auditory fatigue often appears as the initial symptomatology. This could then be retained as a sign of call, avoiding as much as possible the later stages.

Hyperacusis seems to be accompanied by tinnitus in 86% of cases and its pathophysiology seems identical. Tinnitus also appears to precede hyperacusis in 78% of cases.

There are many other noise-related complaints. They include, but are not limited to: stress, loss of intellectual performance at work, sleep disorders, cardiovascular disorders (tachycardia), digestive disorders, aggravation of anxiety and depression, and absenteeism.

These symptoms are largely due to neuro-vegetative phenomena associated with tinnitus and hyperacusis, which are very difficult for some patients, who do not hesitate to run from one doctor to another to find the “miracle” treatment that will cure them. Fortunately, medicine is progressing and various therapeutics proposed nowadays improve a part of these patients

The treatment remains of course preventive and consists as much as possible in avoiding the noise aggressions which have invaded our modern world. Ear protectors (specifically filtering certain frequencies or simple earpieces) are useful in everyday use and can be proposed in case of hyperacusis especially and tinnitus to a lesser degree. Helmets are essential and mandatory for certain professions (exhaustive list with hypoacusis).

Once performed, the lesions (particularly perceptive hypoacusis) are definitive. Tinnitus and hyperacusis are still difficult to treat (see the article “What is tinnitus?”). However, in addition to conventional treatments (corticosteroids) that are not very effective, sophrology, hypnosis, and tinnitus masking, new therapies are emerging that offer hope for an improvement or even the disappearance of these symptoms, which are very difficult for some people to live with.

In conclusion, let us insist once again on the prevention by sound protections which could be systematically worn in our current urban world, as the mask will perhaps be in the near future, for the Covid, arguing also the advantages for the flu and seasonal viral affections other than the Coronavirus.