Hearing is not listening

We all know the difference between “hearing” and “listening”.

A person can hear a noise, a sound or the flow of words coming out of the mouth of another person without any understanding emerging in his mind. Certainly, inattention, a mind cluttered with parasitic or personal thoughts pollutes the message received, but if we do not listen to the person who speaks to us, then the misunderstanding remains total.

Thus, a simple message, an order, a sound remain accessible but an elaborated sentence, which awaits a constructed answer, is not.

The function of the ear is not to understand, but to integrate the data received and to respond in the best adapted and most refined way possible : this process presupposes an acquisition of knowledge which begins at a very young age and requires the good functioning of the auditory system (the absence of auditory perception prevents the development of language, hence the need to fit hearing aids at a very early age). Our environment and the school will therefore play an important role in the development of our initial knowledge.

Even if the human brain is an excessively complex mystery, which we are still far from understanding because it seems unthinkable to understand our brain with our brain, we know that there is a close connection between hearing and cognition.

Guided by Functional Magnetic Resonance Imaging (MRI) – which allows us to draw up a dynamic map in real time and to discover all the areas of the brain that react to the perception of a sentence – we now know that hearing stimulates several cerebral areas and not only the auditory area in the temporal region, as was long thought.

This multi-activation of the brain, triggered by simple words, is processed by the brain as a whole and in both hemispheres. For example, a specific area is activated when one hears words related to social relationships, while another area is activated for numbers or quantities. 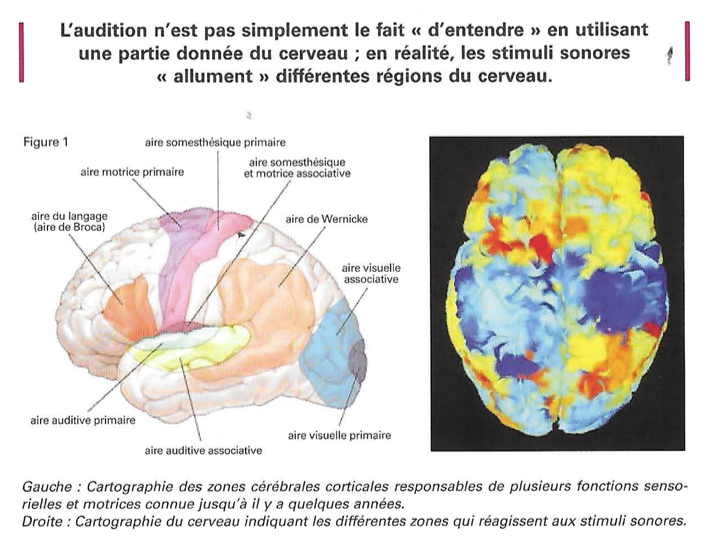 Thus, any word heard has the ability to activate distinct regions of our brain according to the knowledge we have acquired. A word heard can thus reactivate a series of memories, sensations and cultural associations for example. The reverse is also true : cognitive processes influence the perception of sounds. A musical tune, for example, is perceived differently depending on the subject’s musical knowledge.

Moreover, studies have just shown that the brain-ear link is so close that, when we study the ability – for a given subject with a hearing loss – to understand speech in noise, we find that the subject’s own auditory capacity is only involved for 10% !

The main part of the comprehension is ensured by cognitive elements such as :
• The central processing of information,
• Then the subject’s cognitive abilities (memory),
• And finally life experiences such as socio-economic status.

The central nervous system is made up of white matter and gray matter, the latter located at the periphery of the brain.

The white matter consists of the extension of the cell bodies of neurons, called axons, surrounded by a protective sheath (myelin sheath) that gives the tissue its white appearance. These axons connect different areas of “gray matter” in the brain and carry nerve impulses between neurons. The gray matter, located around the brain, houses :

Current studies show that hearing loss affects the white matter, which is altered with a reduction in volume of the cerebral cortex. In addition to a reduction in the volume of the primary auditory cortex, it leads to a reduction in neural activity in these and other subcortical areas. The brain then tries to compensate for this loss by activating collateral circuits, which increases cognitive processes and, as a result, leads to an increase in mental resources. Thus, hearing loss increases the concentration required to hear, increasing the cognitive load when processing data, fatiguing the brain and reducing the attention and cognitive resources available for other activities.

Microscopically, the neurons reduce the spicules on their dendrites, giving a bare, dead-tree appearance.
This vicious circle is bidirectional: 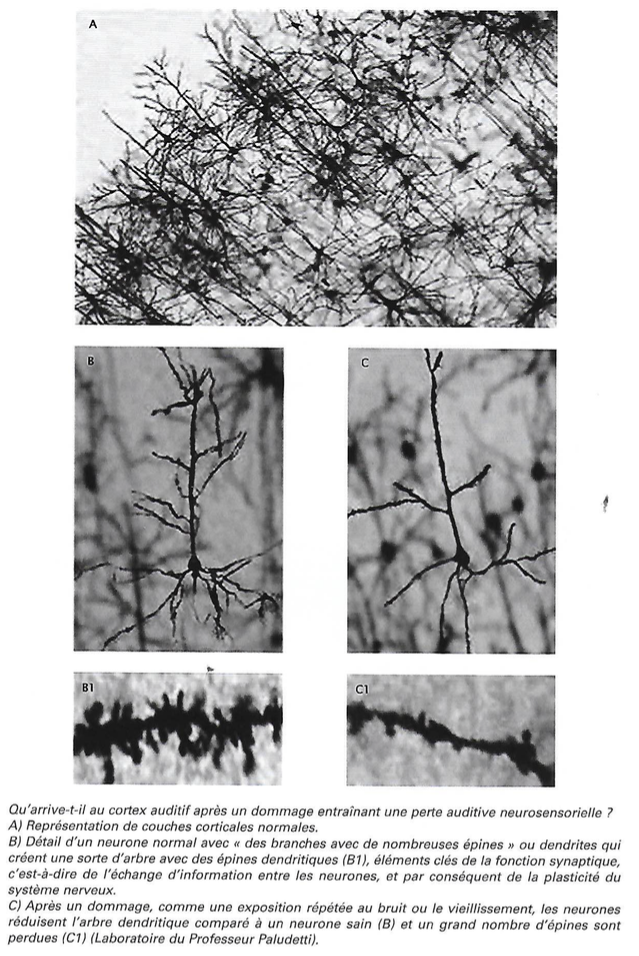 One in three cases of dementia could be attributed to hearing loss.

In 2011, Frank Lin of John Hopkins University presented the results of a follow-up of 600 older adults with no initial diagnosis of dementia, subjected to audiometric tests repeated. The conclusion of this study is that mild, moderate and severe hearing loss is associated with a risk of cognitive decline that is two, three and five times greater, respectively, than in people with no hearing impairment. 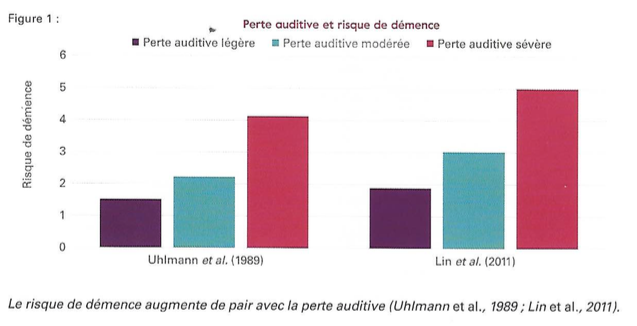 This finding is confirmed by a longer study, reinforcing the notion of a close correlation between hearing loss and dementia. Subsequently, another study of 165,000 adults aged 40 to 69 years found that impaired hearing was associated with greater levels of cognitive impairment.

What are the precise mechanisms underlying this correlation ? Several hypotheses have been put forward :
• Vascular damage at the origin of both disorders,
• Premature “wear and tear” of the cognitive system in hearing impaired patients,
• Social withdrawal in relation to hearing loss, which would favor dementia.

Each year, between 6 and 9 million Europeans, especially women, suffer from dementia. The annual economic impact of the total costs of neurological pathologies exceeds 790 billion euros, compared to

The attempt to slow down this dementia, without talking about stopping it, therefore remains a public health priority. 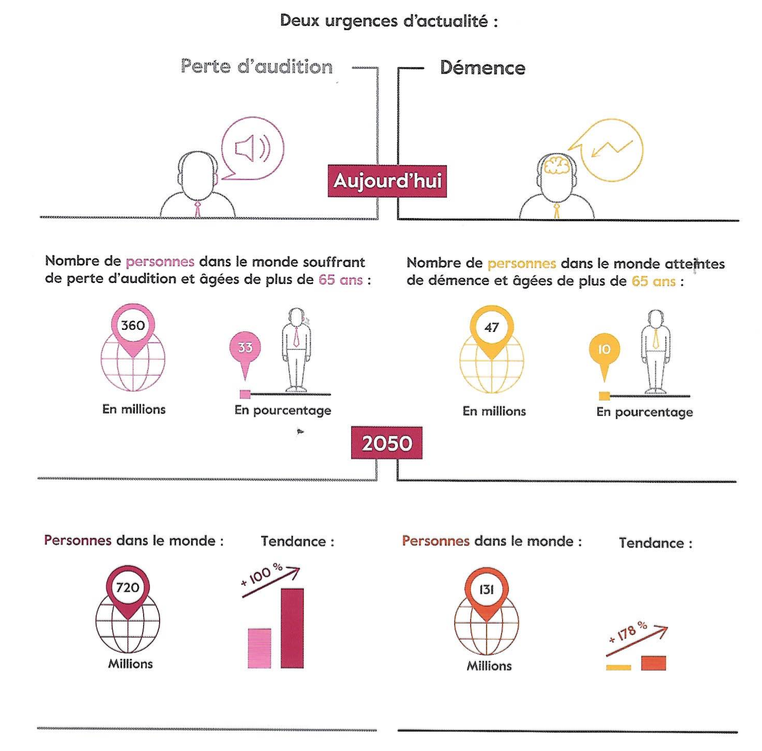 At the same time, the cost of untreated hearing loss, with its cognitive decline and risk of dementia, is also very real and is estimated by the WHO at 178 billion euros per year for Europe.

One conclusion is therefore obvious hearing aids presbycusis must be proposed as early as possible, as soon as presbycusis becomes significant, otherwise individuals will slide insidiously towards cognitive deficit, withdrawal and sometimes dementia. Of course, the individual must accept the hearing aid ! However, the prospect of the consequences of not wearing a hearing aid is not enough to motivate them.
Individuals “jump” the gun as soon as :
• Their discomfort becomes disabling in everyday life,
• The proposed offer is in line with their needs (discreet, efficient, easy to use devices, sold at the right price and with a shortened process to obtain them, which is the case of pre-set hearing aids with the CE standard).

This would be the only way to save billions of euros in the long run. This is also why the significantly lower cost of hearing aids should be a public health priority.

• Peracino A. “Hearing loss and dementia in aging population” – Audiology and Neurology (2014)

• Kohanski R.A et al. “Reverse geroscience: how does exposure to early disease accelerate the age-related decline in health ? ” – Annals of the New-York Academy of Sciences (2016)