Home › Diver in immersion › Consensus for the eustachian tube balance in apnea ?

This approach only concerns freedivers who have a problem with their tubes, both during descent and ascent, and who are considered to be healthy. On the other hand, we will only mention recreational freediving: deep freediving generally does not pose a problem for the divers concerned, who master the techniques that we will recall here. Let us specify from the outset that each case is unique and that many freedivers who have difficulty balancing manage, with time and various personal attempts, to find their way.

We can never insist enough on training, in the pit and in the natural environment, although it is obvious, here as elsewhere, that we are all unique and unequal when faced with the pressure constraints imposed on us.

Before a brief anatomical reminder to better understand what we can try, it goes without saying that the mind plays a major role in balancing during the descent. Here again, it will be directly proportional to the frequency of the descents which, the more important it is, the more it will lift – more or less quickly according to the freedivers – the part of anguish inherent to each one at the time of the apnea descent in the blue (interest of the relaxation, yoga, etc.)

The tube of Eustache is a channel making communicate the case of the tympanum – cavity behind the tympanum – with the posterior part of the nasal fossae. It ensures the pressure balance between the outside world (i.e. outside the eardrum) and the world of the middle ear (behind the eardrum). In terrestrial environment, the Eustachian tube opens spontaneously at each swallow, ensuring at any time this pressure balance, guaranteeing a good listening.

The Eustachian tube is composed of two segments :

2 – The anterior segment is fibro-cartilaginous. Only this last one is modifiable.
It constitutes the anterior 2/3 of the Eustachian tube.
The fibro-cartilaginous segment goes forward, inward and downward.
Its lumen widens, from back to front, up to the pharyngeal orifice at the postero-lateral part of the posterior pharynx (i.e. back nose). 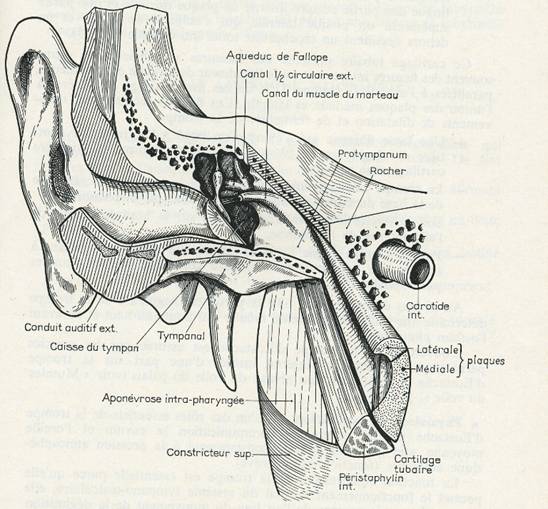 The junction of the two segments is the narrowest point of the tube and draws a more or less open circumflex accent. 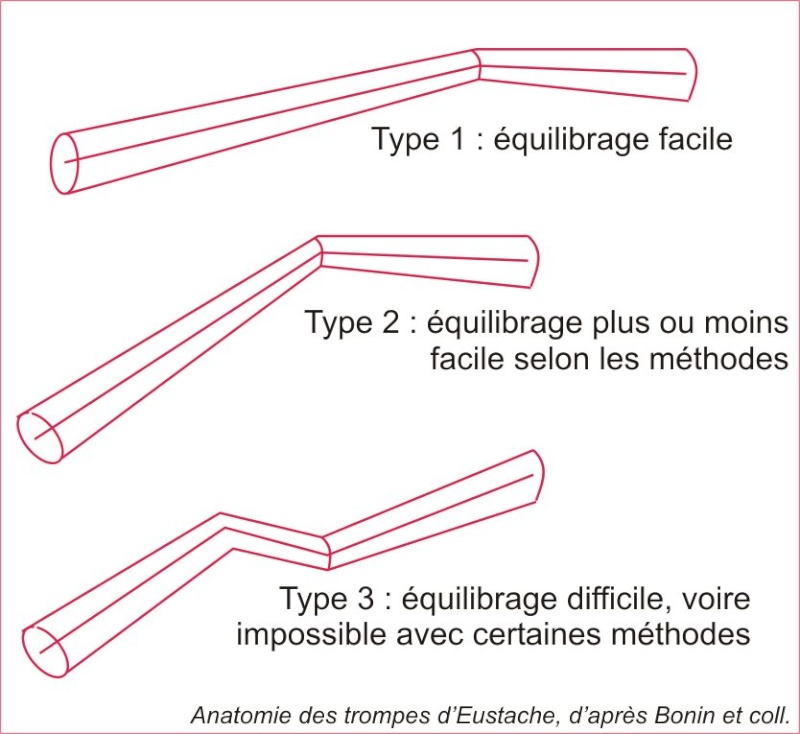 Two essential muscles are involved in the opening of the Eustachian tube: the internal and external peristaphyly.

1.The internal peristaphylline
It is born at the junction of the two segments of the tube and is close, at its origin, to the carotid hole where the internal carotid artery travels.
It ends in a fan shape on the soft palate. Its contraction hollows the soft palate and raises the floor of the tube.

Here is thus, briefly described, the anatomical relations of the Eustachian tube and the principal muscles which intervene in its yawning.
Let us see now the anatomical elements of neighborhood which can interfere in the event of bad position of the head.

The anatomy of the Eustachian tube and its proximity to other important and modifiable anatomical elements will intervene in all freedivers and sometimes make balancing difficult.

1. The anterior wall of the tympanic cavity presents the orifice of the tube below which is located the carotid orifice where the internal carotid artery travels. This carotid artery runs very close to the bony-fibro-cartilaginous junction, from which it is sometimes separated only by a thin bony septum, sometimes dehiscent. A procidence, not exceptional, of the carotid in the body makes the anatomical relations carotid – Eustachian tube even narrower. A little more forward and slightly outward, the glenoid cavity receives the articular condyle of the lower jaw.

3. The internal wall is not very far from the cervical complex and the paraspinal muscles.

• At the level of the carotid artery

We have seen that the carotid artery can be procident (variant of normal).
It can be rigidified (arteritis), particularly in smokers, making the neighboring elements less deformable, starting with the tube. The increase in pressure will aggravate this phenomenon.

• At the level of the internal jugular vein

There can be a very close contact between the retro-tympanic wall and the gulf of the jugular.
The head down position during descent increases venous turgidity (poor venous return) and compresses the tube in part. The head position in hyperextension increases the whole.

• At the level of the cervical rachis

Cervical osteoarthritis with parrot’s beak, hyperlordosis (pathological accentuation of a normal curvature), play on the paraspinal muscles, causing inflammation in the vicinity and painful tensions that can have repercussions on the neighboring organs and in particular on the tubal orifice, which is quite close in its terminal part to the posterior pharyngeal and paraspinal muscles.

• At the level of the temporomandibular joint

Retro or prognathism, which are frequent, will affect the tension of the tensor muscles of the temporomandibular joint (starting with the internal pterygoid, which is very close to the tube at certain points), which has direct repercussions on the body and the tensor muscle of the malleus, which modifies the tympanic tension and affects the pressure of the body.

All these elements will influence the difficulty of balancing the ears on descent.

1. An alternating vertigo
The vertigo is essentially related to an asymmetric evacuation of the coffers. The main cause remains a dysfunctional tube which tends to collapse (any upstream pathology has been excluded) by an insufficient tone.

2. Sharp pain in one ear during ascent, sometimes associated with an emission of blood found in the mask. The phenomenon is the same, with almost impossible evacuation of the air from the body on one side. Here again, it is assumed that there is no cause of obstruction, especially at the level of the tubal orifice.
We can evoke, once again, a dysfunctional tube, which collapses during a hyperpressure of the body and which suddenly opens under the inexorable increase of the pressure, forcing the opening and leading to a micro-tear with associated bleeding. The prevention remains exactly the same as for alternating vertigo :

The principle consists in pushing the soft palate upwards, with the nose pinched, to push back the air stuck in the nasal cavity towards the only orifice left open: the orifice of the Eustachian tube.
It is the tip of the tongue, a very powerful muscle, which is applied behind the dental arches, which pushes the veil upwards.
This imposes an imperative: that the glottis is closed (and not the epiglottis, which is a cartilage that automatically tilts, during food swallowing, to close the airways to the ingested food).
The glottic floor is the space delimited by the ventricular bands (false vocal cords) at the top, the ventricles in the middle and the vocal cords at the bottom. The vocal cords must close completely to prevent air from escaping.
To check that the glottis is closed, there is a simple way: keep the mouth open and try to let the air out of the lungs: a contraction of the glottis is spontaneously and intuitively performed to do so. We know how to close our glottis.
This technique must be well acquired by freedivers.
It is relatively simple and allows you to descend without creating barotrauma in the middle ear.

This method is intended for experienced divers who descend well beyond 20-25 meters.
At great depths, the Frenzel method becomes ineffective: the air in the mouth, compressed, is insufficient in quantity to balance the body. The same is true of the lung, if one is inclined to attempt a Valsalva.
At around 20-25 meters, one carries out an “air intake” from the lungs to the mouth by changing the position of the head. The chin is raised at the same time as the air is drawn in. Immediately afterwards, the chin is repositioned in a flexed position and the glottis is blocked.
The classic Frenzel is then practiced.
The quantity of air thus trapped in the mouth makes it possible to descend several tens of meters without too much problem (the pressure doubling relatively slowly at this depth).

The Voluntary Tubal Beance (or BTV), is an active and soft opening (beance) of the Eustachian tube. The opening of the peristaphylar muscles is mobilized by different methods which aim to open the tube without any trauma.
An excellent method (as for articular problems) is the method of opening by diduction of the jaw. A maximum opening of the mouth with an attempt to move the jaw forward causes the ears to snap, which is a sign of the peristaphylar muscles being used.
This method is simple in theory but not so easy to perform in the water. Not all divers succeed in doing it. Moreover, it must be done frequently during the descent, as waiting too long makes the maneuver difficult, if not impossible.

It is considered that one person out of four spontaneously performs BTV, without even knowing it.

© Alex Voyer for all the pictures in this article.