Derived from the English word for explosion.

In French, it is the set of organic lesions caused by the shock wave of an explosion (blast effect and sound deflagration). We all have in mind war movies where the deflagration of a bomb makes a soldier totally deaf and his ears bleed. Or the American parachutist who was suspended for several hours from the bell tower of Sainte-Mère-Eglise and who became deaf because of the bells that were ringing near him. If, in the first case, the blast effect and the sound trauma can lead to damages on the middle and inner ear and are similar to a blast, the second case is more like a pure sound trauma with lesions on the inner ear.

The lesions caused by a blast of the ear thus include a blast effect and a sound trauma. This type of injury can be found in many modern sports, such as diving and freediving, but not only.

The blast effect can be defined as the brutal displacement of the air during an explosion, which creates a shock wave more or less strong, causing damage directly proportional to the power of this shock wave.

Consequences : of the pressure violence will depend on the anatomical damage of the ear. In the extreme cases, one is in situation of war, but the time in which we live brings us unfortunately closer to these conditions and the lesions can be severe:

> Lesions of the middle ear with tearing of the eardrum, ossicular lesions (fracture or dislocation of ossicles), hemorrhage in the middle ear box, by the brutal pressure which will be exerted on the auditory canal. The result is a very sharp pain in the ear associated with a more or less severe loss of hearing, tinnitus is frequent, otorrhagia is possible (blood flowing out of the canal), and even vertiginous sensations can be associated with these symptoms.

> Damage to the inner ear : exceptional and can lead to the tearing off of the cochlea (organ of hearing, see our article on “The ear”) with intense dizziness and irrecoverable deafness. The pain in this case is intense, the dizziness such that the person is often totally unbalanced, unable to stand and the recovery is very long (several weeks) by compensation by the cerebellum (the vestibule being definitively destroyed). As for the hearing loss, it can be total (tearing of the cochlea) and remains definitive.

The very strong and very brief intensity of the sound of the explosion will cause a traumatic lesion of the cochlea with destruction, often irreversible, of the high frequencies (4000 and 6000Hz most often) but sometimes much more (important deafness and tinnitus) !

Fortunately, most of the time, the blast does not have this intensity but it happens that the ENT specialist meets a typical blast during his activity. It is classically the lesion by slap on the auricle! A very clumsy gesture, often unintentional on the ear. The slap can produce typical blast lesions. The air in the canal is suddenly compressed, which will have repercussions on the middle ear and will cause variable damage depending on the intensity and the closed position of the hand on the pinna. The sound of the slap can damage the auditory cells of the inner ear and often trigger tinnitus, sometimes definitive. A few years ago, a politician had his moment of glory by slapping a kid who was picking his pocket. Fortunately, the slap only hit the cheek ! 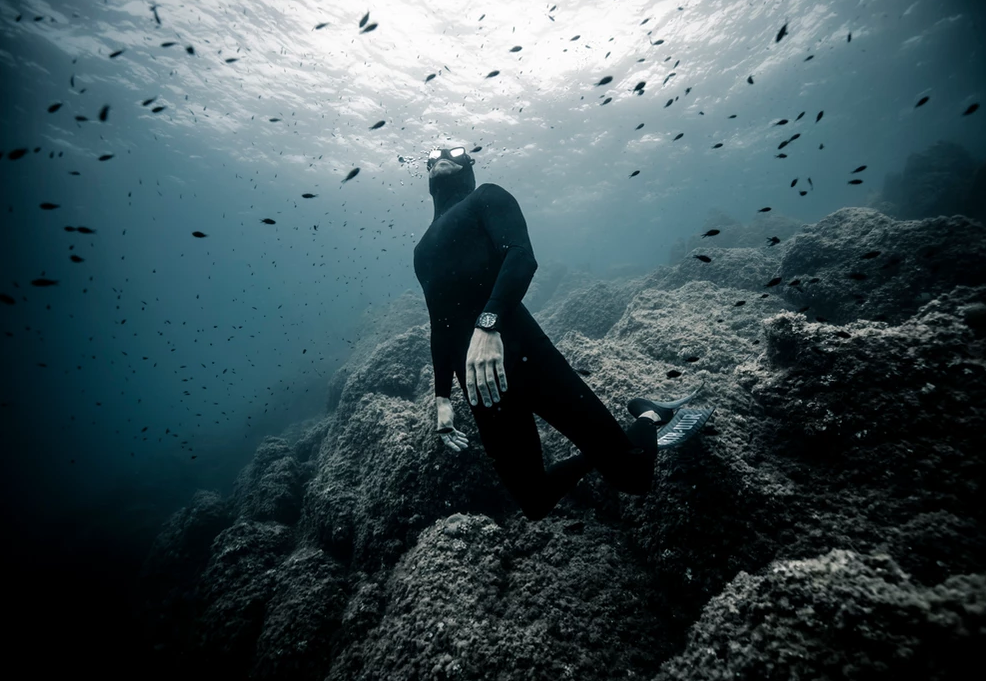 Blast of the ear and practice of modern sports

Nowadays, it does not harm either the middle ear or the inner ear. The pressure wave is almost zero and the sound trauma is strongly suppressed by wearing a helmet, which is becoming widespread.

On the surface, before any immersion, a strong wave can create a blast just like a slap. This also concerns the swimmer and the freediver. Here we have the pressure of the water in the canal and the (discrete) noise of the wave slapping the eardrum. The consequences are identical with possible tympanic tear and more or less severe lesion of the middle ear or even of the inner ear. It can be tinnitus by pressure blow on the inner ear via the stapes without lesion necessarily important, or even non-existent of the middle ear (tympanic congestion, blood or serous effusion behind the eardrum, or nothing). It can be more severe lesions of the inner ear with tinnitus and hearing damage (pressure and noise characteristic of the wave). We can therefore see that before any immersion, the ear can suffer damages very similar, or even identical to those encountered in air blasts. As soon as the ear is immersed, only the pressure constraints appear.

Remember that the pressure on the body and the ear in particular in water increases by one bar every 10 meters, which is considerable. On land, in the mountains, the atmospheric pressure decreases by 0.1 bar per 1,000 meters! An airliner in pressurized flight is at a pressure of 0.8 bar, which means that the increase in pressure when it touches the runway is similar to a descent into water at a depth of 2 meters. This is a far cry from liquid constraints. A diver, in order to descend, is obliged to actively balance the pressures in the tympanic cavity, otherwise he will create what is known as a barotrauma of the ear. It is a purely pressure lesion thus theoretically different from the blast as far as here the shock wave is absent and the increase in pressure on the eardrum is done in a progressive way, associated with an ear pain more and more sharp if one persists in going down without succeeding in balancing the pressures between the case (by opening the Eustachian tube in an active way by various methods) and the conduit, where the liquid pressure is exerted Several stages of middle ear damage are described up to the tearing of the eardrum. These lesions can usually be cured spontaneously with appropriate treatment.

A separate lesion, which could be called the “stapes blow”, is quite particular and is not often mentioned in reviews. It will create lesions of the inner ear, in addition to the lesions previously described. It is therefore to be compared, for the lesions it causes, to the typical blast (middle and inner ear damage) although only the pressure impact is involved. During a rapid descent, the diver, and above all the free diver (no air reserve imposing a rapid descent and a difficulty in getting air into the lung which shrivels up very quickly since at 20 meters it is already 2/3 compressed), will force his balancing maneuvers, especially as they become increasingly difficult. One thus forces by insufflating in its body the air so rare to be able to continue the descent. The “back and forth” of the piston that constitutes the stirrup on the oval window by pressure jerks to bring air into the body, can permanently alter the high frequencies, first of all the 6000 Hz, the closest to the oval window. Other factors, and certainly vascular ones, probably intervene in the etiopathogeny of this lesion in apnea, but the damage, let us remember, is to be compared to the damage caused by a blast.

Any inner ear lesion is however very often definitive despite rapid treatment which is based, for the most part, on early and strong corticotherapy.

The number of freedivers with inner ear lesions is greater than those who do not have any, and this very quickly. Let us insist, if necessary, on the non-traumatic Frenzel method to balance, and if necessary, a voluntary tube gap taught by some instructors or explained on the Internet to be able to enjoy without fear and as long as possible an exciting activity without damaging one’s hearing.

The parachute jump, even if the speed is high, does not pose major problems for a simple reason: a jump is made at a height of approximately 4,000 meters, which amounts to a pressure difference of 0.4 bars. That is 4 meters in a swimming pool. The speed of the fall does not change these physical elements. However, a person who has pain in the air upon landing is not the ideal person to make this jump. Nevertheless, the injuries remain minimal (pain if any, small edema of the eardrum). The wind can create a discomfort but generally the skydiver protects his ears with a headband avoiding these inconveniences.

© Alex Voyer for all the pictures of the article